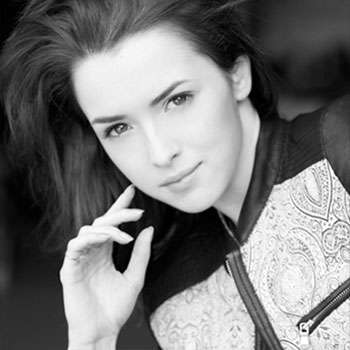 Danielle Gardner was born and raised in beautiful British Columbia embracing the beauty of her birth place she is known for her etherial movement, brave artistry and breath taking choreography. She has become one of the most sought after Dancers, Choreographers and Adjudicators in Canada working with some of the top dancers and companies from around the world. TV appearances: TacoDelMar, ToyStory, Barbie and Lilo & Stitch. Music video appearances include Mariana's Trench "Haven't Had Enough". Films include Center Stage 2 and indie film "Co Dependance" directed by Romantic Child Studios. She is known for her success on CTV's So You Think You Can Dance Canada where she placed in the top 4 girls. An experience she holds very close to her heart and feels shaped her into the artist she is today.

Danielle has most recently been featured along side Flash Dance's Jennifer Beals and All Star dancer Robert Goldan playing the character (Meaghan) in the hit TV show "Motive". Along with Film & TV Danielle has worked along side and toured around Asia, Europe, the US and Canada with companies such as MOVE: the company, Margie Gillis, Marie Couinard, Stacey Tookey, Mia Michaels, Sean Cheesman, Slum Dog Millionaires Longinus Fernandes and 49thParallel.

In 2014, Danielle was asked to work along side faculty from BDC in NYC and the Jofferey Ballet at Danz Activa in Panama City where she guest performed a piece called "Beautiful", taught at there regional convention and judged the most sought after professionals.

If you thought performing, choreographing and adjudicating wasn't enough she is also the Head Choreographer and Director of Team Canada WEST. From 2012-2014 Danielle has taken a team of 100 dancers to Frankfurt Germany and Poland to compete at the IDO World Championships where they competed against 23 countries from all across the world and lead them to become World Champions two years in a row like Danielle was titled in 2008 as a Contemporary soloist at the World Championships in Oslo Norway.

Danielle is the Founder and CEO of IMPACT Dance Productions a dance educational company that shares dance workshops such as IMPACT Dance Workshops and Back 2 Broadway Musical Theater workshops featuring many of the worlds most sought after professionals all around the Canada and America.